The cuisines of Kolhapur is largely influenced by its landscape, the crops grown in this region and the mixed population which comprises of Marathis, Gujratis, Brahmins, Marwadis and Muslims.

The Maratha community feed exceedingly on pulses, vegetables, bhakris, rice and meat. The red meat preparation of Kolhapur is well known throughout India and it is mainly because of these non vegetarian cuisines Kolhapur has made its mark.

Tourist visiting Kolhapur can be assured of a memorable feast not only because of the subtle variety and strong flavours of the local cuisine but also because of the legendary hospitality of the Kolhapuri people. It should, however, be noted that the Kolhapuri dishes are generally spicy and may not suit everyone. 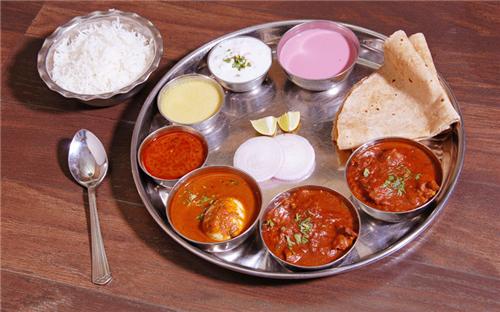 If you are lucky and get a chance to experience a traditional style meal at a typical Kolhapuri household, you will observe the aesthetic presentation of the food which adds extra allure to the feast. The meal starts with a practice of rendering sacred verses dedicating the meal to God. A guest sits on a floor rug or wooden seat and food is served in Silver or Metal thalis and bowls placed on a raised Chowrang.

To avoid mixing of flavours during the course of the meal each guest is given a bowl of saffron scented water to dip his fingers in before starting the next course. Traditionally there is a specific order in which the meal has to be served course after course be it Curries, Rice, Rotis or sweets etc. A host who does not know this order is not considered to be well trained in typical Kolhapuri hospitality. Incense sticks are lighted to spread fragrance around during the meal which adds to the great experience while relishing the delicious meal.

A normal daily meal in Kolhapur consists of Chapatis or Bhakris, Naan, Parathas, different varieties of dal and rice, meat dishes, Misal pav and Sabudana Kichdi. Khanda Bhajji (Onion Bhajias) and Batata vadas accompanied by chutney along with tea is enjoyed by locals on a daily basis. 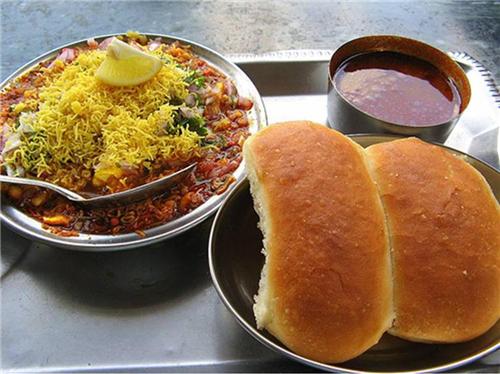 Kolhapuri Misal Pav: Kolhapur is a food paradise for spicy food lovers. Kolhapuri Misal is one of the famous dishes of Kolhapur. Traditionally a mixture of boiled matki beans, potatoes, farsan, sev and kat (curry), a spicy soup like gravy made with garam masala, onions, tomatoes, garlic, ginger and coconut. It is usually served with bread or pav. Hot and Spicy are the words which describe this snack to certain extent.

Tambra and Pandra Rassa: “Tambra Rassa”, is a red curry and a popular Kolhapuri starter. It is a very spicy dish made with the usage of special chilies which make it to appear "Tambra" (bronze red). This curry is more famous within the rural areas of Kolhapur. “Pandhra Rassa” a white curry is also a much liked starter of Kolhapur made with yoghurt and is also spicy. Besides the taste both these starters have medicinal benefits and are known to be effective against ailments related to cough and cold. After these starters Kolhapuri people feast on the specially made roasted mutton.

Kolhapuri Mutton Dry: Kolhapuri Mutton Dry is always on the menu during celebrations in Kolhapur and people are very particular about the source of their meat. Roasted mutton is a special cuisine which is prepared lavishly in Kolhapur. Different varieties of this dish are prepared with different spices. One such famous type is the ‘Ghaati Mutton’. Mutton dishes along with Bhakari or Chapaati constitute the Kolhapuri Taat (Thali).

Veg Kolhapuri: Veg Kolhapuri dish is a mixture of certain vegetables and prepared with Kolhapuri masala, is often spicy and is served along with Chapati, Naan or Parantha.

Pithala Bhakri: Traditionally known as a farmer's meal in Maharashtra. Pithala is made up of Besan (chickpea flour) and tastes delicious with Jawar bhakari accompanied by raw onions and Kolhapuri chutney. Pithala Bhakri is very popular amongst local Maharashtrian people.

Puran Poli: Puran poli is a traditional Marathi sweet dish which is prepared during auspicious occasions and festivals such as Holi and Gudi Padwa. It is like a Paratha with a sweet stuffing, made from channa dal and jaggery.

Shrikand: Shrikhand is a typical Indian sweet dish made of strained yogurt garnished with dry fruits and nuts and is one of the main desserts in Kolhapuri cuisine.

Kolhapur is naturally gifted with fertile land for cultivation of Sugarcane and the produce here is known for its high level of sweetness. Kolhapur has vast Sugarcane fields and a total of 12 Jaggery factories within the Kolhapur district. The jaggery production is fascinating to watch at village 'Gurhals' as they still follow the old and traditional method of making Jaggery. The Kolhapuri jaggery is famous throughout India for its light colour and sweetness. Kolhapur is also famous for its sugarcane juice and small stalls can be seen everywhere in the city.

Dudhkatta a very unusual tradition followed in Kolhapur and nowhere in the world is this kind of tradition even heard of. During evenings at certain city points milkmen lead their cows and buffaloes out on the streets and the local citizens walk up to them and ask for milk. The buffalo is milked then and there. Milkmen in rural areas of Kolhapur district travel along with these cows and buffaloes from door to door providing fresh milk to the residents.

Where to eat authentic Kolhapuri food

Comments / Discussion Board - Food in Kolhapur